Why do we say Zodiac to talk about a semi-rigid boat?

If you ask anyone to list the different types of boats they know, chances are that among the answers such as "Sailboat", "Boat", "Raft", "Catamaran", an intruder will slip in: the Zodiac.

Indeed, unlike the other examples above, Zodiac is not a common name, but a trademark, which does not prevent it from appearing in the dictionary!

But where does this curiosity come from? Why do we use the term "Zodiac" to designate an inflatable boat?

This is what is known in French as an antonomasia, i.e. a word or expression that is a proper noun replacing a common noun in usage. This is the case of other famous brands such as "Typex", "Blanco", "Post-It", "Frigidaire", "Kleenex", "Jacuzzi", "Scotch" and many others!

If the generic term "semi-rigid boat" is the common name used in French by most of the brands, in everyday language, it is the term Zodiac that is still in vogue!

In France, the expression "Bateau Zodiac" is 6 times more searched on Google than "Bateau semi-rigide", and remains 50% more popular than "bateau pneumatique"!

So how did the brand become known and enter our vocabulary? Orca Retail answers you!

A short history of dinghies

First of all, let us note that men have known for a long time that air-filled volumes can help them to navigate, with certain sources dating their use as early as antiquity, with at the time boats made of animal skin!

But it is only in the middle of the XIXth century that we find the first traces of inflatable boats, ancestor of the current Zodiacs.

It was the invention of the vulcanization process and the use of rubber by Charles Goodyear in 1839 (and the invention of pneumatic tires) that allowed for the creation of the first inflatable boats, since that same year, the Duke of Wellington was the very first to try the principle.

The 1840's will see the development of new models, with the notable example of the Englishman Thomas Hancock in 1840. Very quickly, the technique was used in many expeditions, including one to the Arctic in 1844. However, at that time, there was no trace of a Zodiac...

The brand and inventors that will change everything

The origin of the Zodiac brand can be traced back to 1896, when the company " Mallet, Mélandri et de Pitray " was founded in France. Maurice Mallet, a famous aeronaut of the time, was involved in developing the production of the first airships.

It was not until 1909 that the group changed its name to the iconic "Zodiac". But the story doesn't end there.

Pierre Debroutelle, a former airship pilot and engineer employed by the brand, was responsible for the "modern" versions of Zodiac inflatable boats, with the first prototype developed in 1934.

That same year, a competitor named Paul Brot marketed his own RIBs under the PB brand before joining Zodiac with his patents.

These initial promising tests were quickly validated when, in 1937, the French Navy ordered a boat capable of carrying torpedoes and bombs: this was the birth of the Zodiac and the beginning of its industrial-scale production.

This model takes its well known U shape, and is equipped with two lateral air chambers joined by a wooden dashboard. The patent for this model was not filed until August 10, 1943, in the middle of the world conflict.

The semi-rigid boats will mark the second world war, allowing many aviators or sailors to save their lives once their plane or ship is shot down.

After the war, the success of the Zodiacs did not stop, on the contrary, in 1950, ministerial decrees made it mandatory to have inflatable rafts on board commercial ships and all fishing boats over 25 tons.

Then, in 1952, another great name in sailing put the spotlight on the brand in the person of Dr. Alain Bombard (who gave his name to the competing brand of Zodiac that is now well known). He then set out to cross the Atlantic from Tangier to Barbados aboard a 4.30-meter Zodiac named " The Heretic "which will become a legend.

The post-war period will also see the beginning of paid vacations and the creation of seaside resorts and the appearance of water sports for the general public. RIBs are then perfect to enjoy the sea simply and cheaply, and are used for rescue missions near the coast, especially after the appearance of the new surfing fashion.

Zodiac then turned to the leisure industry, and very quickly, the models multiplied and the popularity of the brand grew, becoming anchored in the customs and habits of French society. 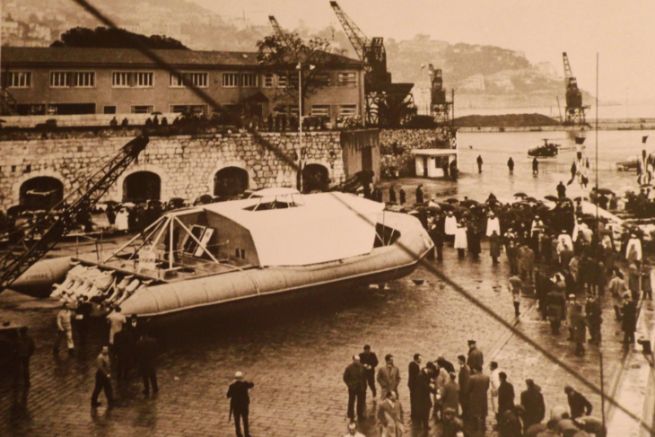 Zodiac in the 21st Century

Today, the illustrious company is divided into two entities, "Zodiac Nautic" for recreational activities on the one hand, and "Zodiac Milpro" for the military and professionals on the other.

From vacation clubs to the U.S. military, Zodiac is now present all around the globe, and although the RIB market now has dozens of quality competitors, the language habits are probably not about to change!

You are passionate about boating and semi-rigid boats?

Read more about the world of RIBs :

Receive all our updates and promotions.

Added to your basket :

** total_quantity ** | ** unit_price ** / ** unit_measure **
Basket subtotal
New on ORCA Retail by Pennel & Flipo?
Create an account with us to view the status of your order online. Your details can also be saved for faster checkout.
REGISTER TODAY
ALREADY REGISTERED? SIGN IN
CustomerHub